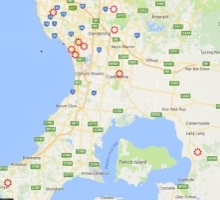 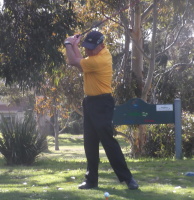 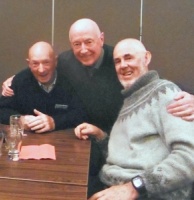 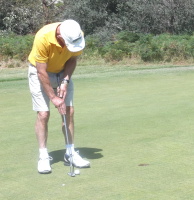 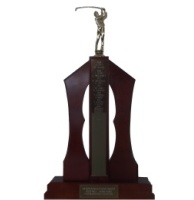 President Donald welcomed us to Patterson River Golf Club for the Bob Leverington Perpetual Trophy stableford competition and asked all present to thank the club for the use of their facilities, and their generous donation of our main raffle prize. It was a dry but windy morning and the course was in good condition, with putting on slick greens being a challenge. The lunch and the clubhouse facilities were thoroughly enjoyed by the members.

We had a terrific turnout today, with 57 players involved in the competition. A late withdrawal for today's event was Peter Sloan. There were 3 guests: Jim Collins was a guest of John Killmister, Chris Moot was a guest of Laurie Comerford,  and Bill Cribbes was a guest of John Molloy. Donald was delighted to report that all 3 gentlemen have decided to join the Vets. Welcome to Jim, Chris and Bill. They each received the customary gift of a golf ball.

There were 16 apologies this month.

Donald and the members thanked Gary Finnis, Roger Selwood and Jeff Stevens for doing an excellent job of getting the groups away quickly, despite being faced with a 30 minute delay because of host club difficulties. We also continue to focus on slow play. Please take pride in your club and always ensure that you "keep up with the group in front of you".

Our 2019 AGM will be held on Monday 4th February at Rossdale GC following on from the golf and lunch.

We continue to make progress with our Members Contact system, with the loading of member's photographs. If you have still to do this, and this includes our 3 new members, please see either John Molloy or Laurie Comerford during our lunch at Keysborough. It is important as the Club continues to grow, that we complete this initiative early in the New Year. Communication is so important to the wellbeing of our Club, and the photographs help enormously. Get in touch with either John or Laurie by email to set it up and they will make sure the job is done.

All members will have received their invitations to our

No report this month as Committee will next meet on Monday 14th January, 2019.

In the past month or so, we have noted the following successes;

Congratulations to our Vets winners.

There were no questions although Colin Wiseman injected some humour into the day's proceedings. Thank you Colin!

Have a great festive season and we look forward to seeing you all in the New Year.

The last month has been used to modify the appearance of the top part of the web site to make it more dynamic and show a wider range of our members. The only rule for appearing there is to have been caught by the webmaster's camera while you are wearing your club shirt.

On another note Laurie spent a few not very productive days as a 'player movement' volunteer at Metropolitan GC for the World Cup. If you have ever needed to play out a bunker, or on an attractive course take these in.

Our winners receive a $40 House of Golf voucher for their effort.

'We provide comfort in all situations on the golf course'.

A rabbi, a priest, and a minister walk into a bar. The priest pulls out a deck of cards and pretty soon they are playing a little game of poker.

The local policeman comes in and arrests them for violating the town's strict anti-gambling laws.

They are hauled before a judge the next day, and everybody is kind of embarrassed about it, including the judge.

"Look," says the judge, "just tell me you weren't gambling, and I'll let you go."

"Well," says the priest, "gambling qua gambling seems to me to imply some sort of intent to win money or with the idea that it would exchange hands at the end of the evening, whereas considering a hypothetical situation such as the one we were engaged in where the money is taking on more of the role of a token merely for tracking the interplay of the game and the relative ...".

The judge is pleased to hear this abstract argument and quickly dismisses the charge saying, "Accepted, you can go."

The minister steps up and rambles on. "It seems to me that given divine foreknowledge of all events, even if we mortals are not so gifted raises the question of whether gambling as a concept can really ...". The argument is accepted and the charge dismissed by the judge just leaving the rabbi in the courtroom.

"Well?" asks the judge. "Rabbi, were you gambling?"

The rabbi looks around and shrugs his shoulders.

We're nearly there. Only a few weeks till January 1st when the new rules come into operation. By now members with home clubs should have been able to obtain a copy of the 'Players Edition' of the new rules.

There are three versions of the new rules. The Players edition has lovely coloured graphics to assist understanding. The Full Version and the Official Guide would normally not worry Club golfers.

Moving away from the R&A site from where most of the previous information has been referenced this month the USA site is favoured. This page has a clear descriptions of the new rules as they will affect us. It is really worth looking there.

One new rule not previously mentioned in our newsletters is the removal of the penalty for accidently hitting your equipment (or that of your opposing players). This means (provided it is accidental) - you can clobber your opponent with a well timed drive without penalty.

Keysborough for the Bill Fitzsimmons Trophy starting at 7:15 on 14th January

Back to home page | Back to top