Vice President Gary wished everyone a Happy New Year and welcome to our 1st game of 2018. , Gary informed members Keysborough golf club is one of the prestige courses we play during the year and is rated in the top 100 courses in Australia.  Gary asked that everyone please acknowledge Keysborough golf club for their hospitality and use of their facilities.

Today we had a great attendance of 53 players and welcomed today 3 guests.. Mick Kelly guest of John Molloy, Rex Buckeridge guest of Roger Selwood, Ray Curren guest of Harold Hayes. Each of these guests received a golf ball and were thanked for attending today and hopefully may consider joining our club.

Gary reminded those members introducing guests that it would help if at the time of booking that they provide the handicapper with their golf link number if they have one or give an indication of their playing ability.

Gary thanked his to fellow starters today Jeff Stevens and Roger Selwood. Well done guys.
Gary encouraged members to volunteer to act as a starter. It's a bit of fun and a good way to get to know more members of our club.

Gary also reminded everyone that our sponsor Innis Ireland of House of Golf Moorabbin subsidises our monthly prizes with vouchers and urged members to consider them if you can when looking for golf gear.

If anyone requires club gear, Shirts, jumpers or hats please see our marketing man Daryl Edwards.
Gary then handed over to Captain Harold for todays results. 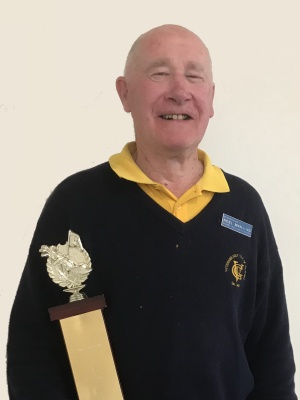 Our winners receive a $40 House of Golf voucher for their effort.

Ray Desmond celebrated his good day at Keysborough by winning the raffle allowing him and three of his mates to play again at Keysborough with carts.

Get these special carts coloured for the Northern Irish.

On the first day he sadly packed his belongings into boxes, crates and suitcases.
On the second day he had the movers come and collect his things.

On the third day he sat down for the last time at their beautiful dining-room table with candle-light, he put on some soft background music and feasted on a pound of shrimp, a jar of caviar, and a bottle of spring-water.
When he'd finished he went into each and every room and deposited a few half-eaten shrimps dipped in caviar into the hollow center of the curtain rods.
He then cleaned up the kitchen and left.

On the fourth day the wife came back with her new boyfriend, and at first all was bliss.

Then, slowly, the house began to smell. They tried everything; cleaning, mopping, and airing-out the place.
Vents were checked for dead rodents and carpets were steam cleaned.
Air fresheners were hung everywhere. Exterminators were brought in to set off gas canisters, during which time the two had to move out and in the end they even replaced the carpet. Nothing worked!

Friends stopped coming over. Repairmen refused to work in the house. The maid quit.

They couldn't take the stench any longer and decided to sell, but a month later - even though they'd cut their price in half - they couldn't find a buyer.

Word got out and eventually the local agents refused to return their calls.

Finally, unable to wait any longer for a purchaser, they had to borrow from the bank to purchase their new place.

Then the ex called the woman and asked how things were going She told him the saga of the rotten smell. He listened politely and said that he missed his old home terribly and would be willing to accept the smell if their divorce settlement was suitably adjusted.

Knowing he could have no idea how bad the smell really was, she agreed on a value that was only 1/3rd of what the house had been worth, but only if he would sign the papers that very day.

He agreed, and within two hours her lawyers received the completed paperwork.

A week later the woman and her boyfriend stood smiling as they watched the moving company pack everything to take to their new home --- and to spite the ex-husband,

they took the curtain rods!

Rossdale for the Royce Hollingworth Trophy starting at 7:15 on 05th February

Back to home page | Back to top